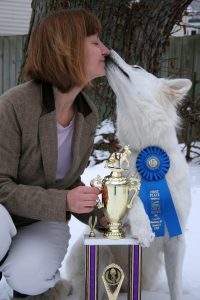 Lena Ralston has been training dogs and competing in multiple sports and performance venues for about 38 years – 26 of which were in her home country – the Republic of Belarus, and 12 in the USA. To her training dogs is a form of art. Her first experience in canine sport competition was when she was 13 years old and started training her first German Shepherd for the Summer Combined Competitions (incudes100 meters sprint with obstacles, military style agility and protection). In a couple of years of training and intense preparation Lena with her German Shepherd became the youngest members of the First Belarusian Summer Combined Competitions team and began competing on the National level. It was that voluble experience of a true teamwork with her dog and other team members that taught Lena many valuable lessons and fueled her life-long love for canine sport.

For the past 12 years Lena have owned and co-owned, trained and actively competed with her five German Shepherds that hold over 60 performance titles and awards combined in obedience, rally, agility, herding and scent work. Several of her dogs have achieved multiple High in Trial’s in AKC and UKC trials, UKC Total Dog awards, Performance Award of Merit from GSD Club of America, and perfect scores. Lena’s dogs have held top obedience and rally rankings in the past 8 years in AKC and UKC. Here are her dogs’ credentials from oldest to the youngest:

Lena has been professionally training dog in competition obedience all level in WLTC for the past 4 years and Scent Work in HABOC for the past 2 years. She tailors her training program according to each dog’s drive and temperament to ensure that every one of them riches his/her highest potential. Lena uses variety of effective training techniques that are rooted in the animal science and based on each dog’s temperament and each owner’s ability. Cultivating deeper understanding of canine behavior and teamwork, training without conflict and clarity of communication between a handler and his/her dog are the pillars she builds her training on.