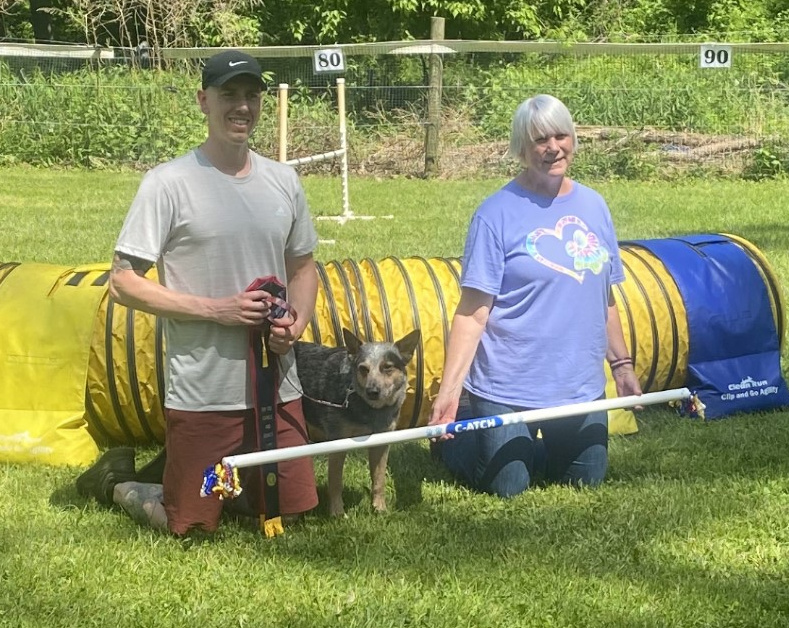 Mike Hughson has been doing agility since 2017 and competing since 2019. He has a 6 year old Australian Cattle Dog, Bebe, and a 16 month old Border Collie, Rush. Agility and dog training has quickly become a huge part of his life and he loves being able to share his knowledge and teach people skills to be successful in their agility journey with their dog. Mike has trained aside the wonderful Susan Garrett and her training programs, including Recallers, Handling 360, and Agility Nation since 2018. Within the last year he has worked with One Mind Dogs as well to expand his skills and knowledge further. Mike is a full time Math teacher during the school year and he feels that this skill set helps him be able to provide meaningful, carefully planned lessons for his students. During the summer break from school, Mike shifts his attention to teaching agility.In agility, Bebe and Mike have earned their CATCH title in CPE. They currently are working toward their PACH title in AKC and their championship title in UKI. He is a UKI Agility judge as well. This past year Bebe and Mike earned a bye into the UKI US Open Finals and they hope we get the chance to go and compete for the first time. Rush is just starting his agility journey and has showed some very exciting and promising accomplishment for the future. Aside from agility and dog training in general Mike  is a huge advocate for relationship building with handlers and their dogs. Whether it be obedience, agility, fly ball or any other dog sport Mike strives to always remind people it is just a big fun game! We need to consciously and continually perverse the confidence in our dogs as well as enjoy the journey you are on together. Our dogs are only with us for a very short period of our lives, make the best of it!